Instagram Stories is a feature that allows users to post short videos that disappear in 24 hours. Stories are ephemeral on purpose; they are designed to keep users on the platform longer or to keep them checking in more frequently.

A few nonprofits started using Stories right away. However, there was no way to give viewers an easy call-to-action. In order to donate, users had to click out of the app. To solve the problem, Instagram introduced donation stickers in April of 2019. 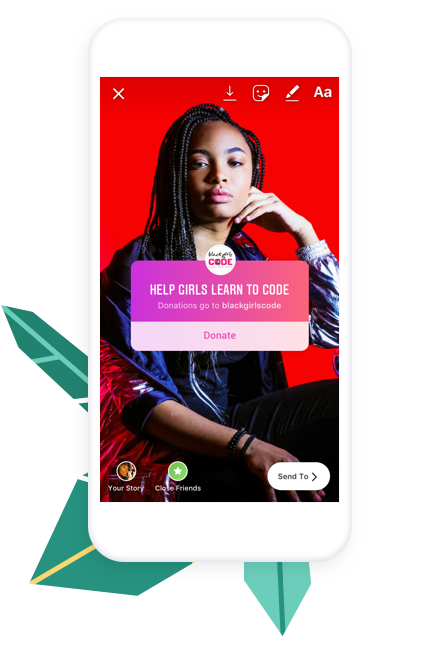 When a donor taps a donation sticker, they see a popup that contains the nonprofit’s bio and a range of dollar amounts from which to choose. They can also click through to the nonprofit’s website.

The first time a donor gives on Instagram, they’ll have to register their payment information. After that, they can donate between $5 and $2500 at a time. If they swipe up on the story, they’ll see a running total of the contributions.

Instagram doesn’t deduct any fees, so nonprofits get 100% of the donations.

Stories and Stickers Are New

Facebook fundraisers last up to two weeks while Instagram Stories only last 24 hours, reducing the number of people who have the opportunity to see them.

On Facebook, a fundraisers posts to a user’s feed. All their followers have to do is scroll to see it, which is a fairly passive action. On Instagram, users have to click the Stories icon to see it, requiring them to actively leave their feed.

Nonprofits are still learning how to use Stories to their advantage, and many are just learning how important storytelling is to raising money on social media. To raise money on Instagram, nonprofits must create and implement a strategy to drive donations.

Facebook Messenger allows nonprofits to leverage innovation solutions such as GoodUnited’s managed services and custom Messenger bots that help them engage with donors and fundraisers. Instagram doesn’t have that functionality.

One way nonprofits may be able to boost giving through Instagram is to use Stories in the same way they use live streaming on Facebook, and by teaming up with influencers to drive donations.

When Instagram rolled out the donation sticker, they teamed up with celebrities and their favorite nonprofits to spread the word (You may not be able to recruit Julia Roberts to create a Story for you, but you may be able to partner with local influencers in your community).

Facebook announced earlier this year that they are aligning their backend infrastructure for WhatsApp, Messenger, and Instagram messaging. Using Facebook tools, users would be able to send a message to any one of those channels. It wouldn’t be surprising if Facebook developed a way to connect Messenger to Instagram, opening up a communication channel between platforms – and between nonprofits and donors.

Right now, fundraising through Facebook is giving nonprofits the most significant lift and it’s unlikely that Instagram will generate the kind of funds Facebook fundraisers have – at least for a while. Still, there’s value to unlock in Instagram. You just need a well-thought-out strategy and active approach.

Every significant shift in giving happens with a single step. When we think about landing pages and websites, it started small; not many people were using the Internet. Those organizations that were early adopters were well positioned to capitalize on the opportunity when the market caught up. It’s the same for Instagram: you must start somewhere. Nonprofits that put in the early work will be better positioned later.

Want to see how it works? Schedule a demo.